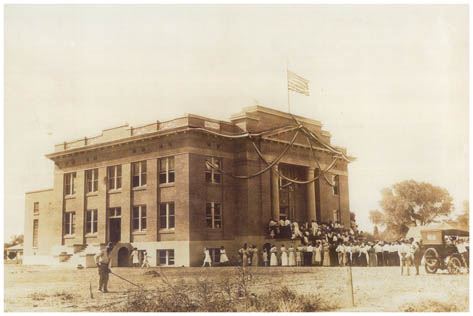 Washington, February 14 - To the accompaniment of the whirr of three moving picture machines and the click of a battery of cameras lined along the wall of the executive office, President Taft, at 10:02 this morning, signed the proclamation admitting Arizona to the Union as the forty-eighth State and at the same time completed the chain of States from ocean to ocean, eliminating the last Territorial form of government for continental United States, except the District of Columbia.

After he signed the duplicates, which he forwarded to Arizona for filing in the archives of the State, the president looked up smilingly, and said: “Well, there you are.” He used a gold pen which he later presented to Postmaster General Hitchcock. The room was crowded during the ceremony by all of the Arizonans at the capital, numerous other high officials and members of the press.

Immediately after signing the instrument, President Taft sent to the Senate the nomination of R.E Sloan, former Territorial governor, to be United States Judge for the District of Arizona. The president then sent the following message to Mr. Sloan: “Have this morning signed the proclamation declaring Arizona to be a State of the Union. I congratulate the people of this, our newest commonwealth, upon the realization of their long cherished ambition. My best wishes to the retiring and incoming officials.”